The international Colloquium Local Cultures and Greek Paideia in the Graeco-Roman East took place at Faculty of Philology of the University of Salamanca from June 29th to 30th 2017.

A total of 14 talks dealt with several issues concerning the Hellenization of de Graeco-Roman East from different perspectives (Linguistics, History, Literature, Religion, etc.), paying special attention to the epigraphic and papyrological sources. Each talk was followed by a discussion in which the members of the project and other participants contributed with their comments and remarks. All papers will be shortly published in an edited volume by Peeters (forthcoming 2019). 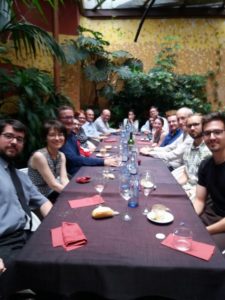 On the occasion of this colloquium, the speakers and attendees were also invited to join the organizers in several activities, such as a guided tour to the General Library and to the historic building of the University of Salamanca. They had also the opportunity to assist to several open-air shows that run in parallel to the colloquium during the annual urban music festival FACYL (International Art Festival of Castilla y León).

We use cookies to ensure that we give the best user experience on our website. If you continue to use this site we will assume that you agree.I agree